The Enchanted Loggia in Treviso

The fairytale artistic installation named the “Enchanted Loggia” built under the Loggia dei Cavalieri, one of the most important monuments of Treviso dating back to the 13th century, has already become viral on Instagram. The project aims to create an artistic hub for 2018 Christmas’ events  with a rich program of concerts and shows, show cooking by starred chefs and tastings, that will end on January 6th.

The installation, conceived by  Studio Metamorphosi104, is inspired by the Venetian tradition. The forest, including the gigantic “tree of life”, is inspired by the Montello hills, near Treviso, that used to be the source of wood for the Serenissima Republic of Venice. The artwork was built using tens of tall plants, more than ten thousand lights, thirty cubic meters of bark and eighty seats in recycled wood. Playing with the colors and tones of winter, the interior designer Michele Crema has created an enchanted forest with a thousand of shades emphasized by suspension lamps Saya by Fabbian made by Venetian glassmaker masters. 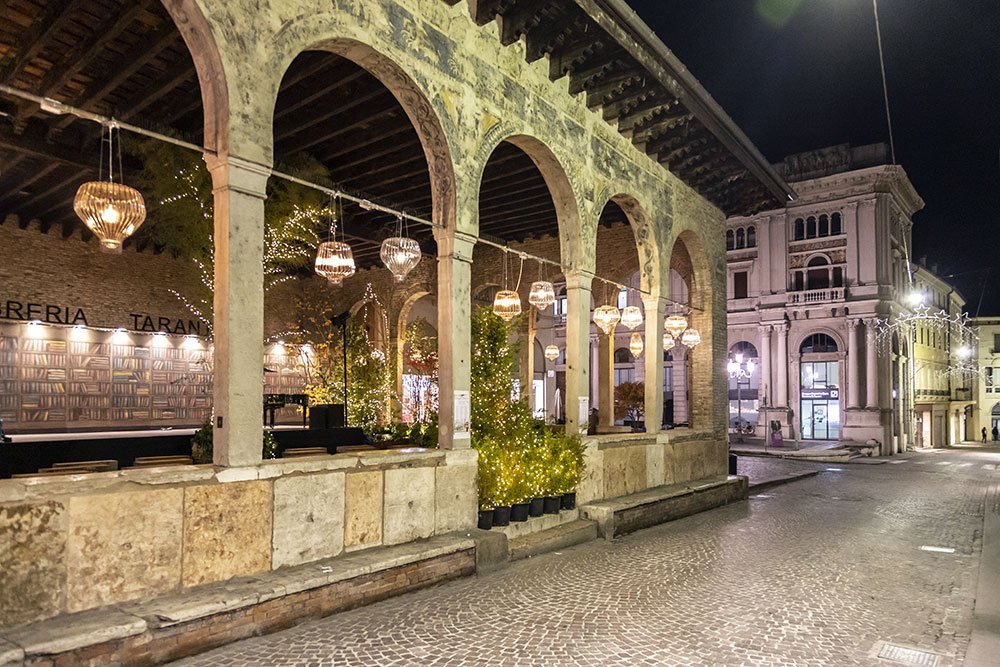 The real soul of the installation, even in its deepest meaning of cultural rebirth of the monument, is a mural of 15 meters, created by the artist Diego Sacilotto with the collaboration of the artisanal carpentry Falegnameria 3b, which serves as theatrical background to the stage of the Loggia Incantata. The artwork, a tribute to the city, is inspired by the historic Tarantola Bookshop, which moved here in 1944 after the bombing of their original store. This Bookshop marked the cultural renaissance in Treviso after World War II, keeping the Loggia alive until 1985 when due to the restoration of the monument it was transferred, leaving an indelible memory.

The 15 panels composing the mural, which the artist is completing in a daily live performance, will be auctioned on January 6, 2019. The profits will be used to finance next cultural events of the Lodge. This project was strongly desired by the Administration, the Chamber of Commerce and the commercial operators of Treviso to create a magical place to live holidays entertaining visitors with a different show every night, but most of all to make a social operation. An artistic installation meaning a project of social education to Beauty and Art in a place recently known for episodes of decay and bullying.
Read the complete program: ForestaIncantataTreviso.