When it comes to Danieli, you must be prepared to dream, think and live very big. Every detail, from its legendary history to the luxury furnishings, till the gastronomic treat and its amazing panoramic view, embodies the most exotic, aristocratic and exclusive experience that Venice can possibly offer.
On the picturesque Riva degli Schiavoni, between Piazza San Marco and Giardini, the famous 5-star hotel includes the Dandolo Palace, built by the Dandolo family back in the 14th century, with the later additions of Casa Nuova, a 19th-century building, and Danieli Excelsior constructed in 1940. Erected according to the will of the mighty Doge Andrea Dandolo, brother of Enrico, famous for the conquest of Constantinople in 1204, it became one of the most luxurious palaces of the Grand Canal, allegedly decorated with the booty of gold, marble and Byzantine artworks carried by the Doge in Venice from the Ottoman Empire. In 1822 the palace was bought by Giuseppe Dal Niel, known as Danieli, who converted it into a hotel. In those years the building undertook also an extensive restoration that transformed the entrance hall into the apotheosis of Moorish arches, oriental columns and golden stairs that we know today. 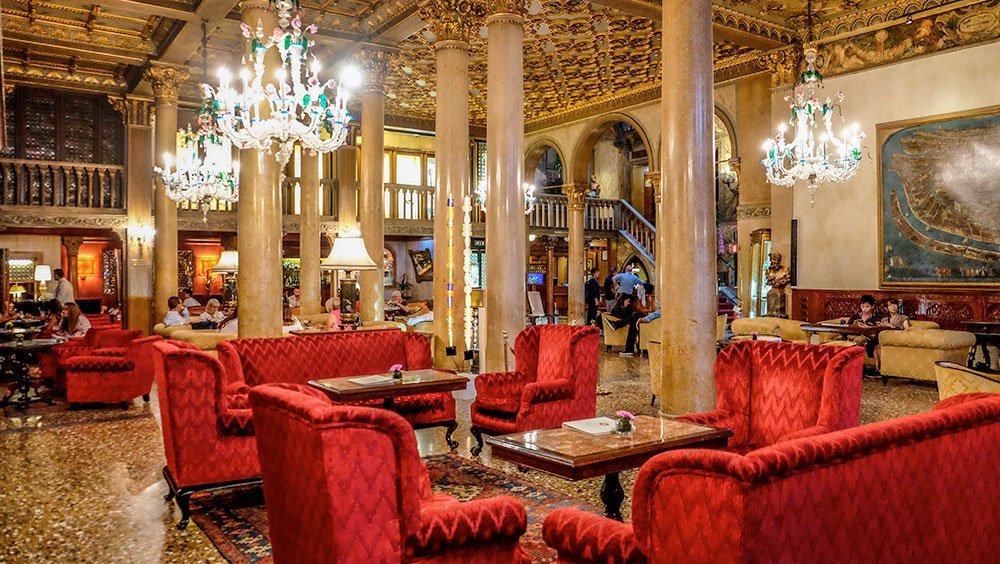 The interiors are an ensemble of works of art, antique furniture, Murano chandeliers and gold-leafed ceilings that makes Danieli one of the hotel-museums most iconic in the world. Its terrace is definitely the most impressive in Venice with an 180° view over Giardini, Isola di San Giorgio and Punta della Dogana; but it’s not just all about the panorama as the rooftop’s restaurant is just as “spectacular“. The Executive Chef Alberto Fol is, in fact, world-renowned for his dishes rich in taste, nutritious, but at the same time free of fat, sugar and with little salt, inspired by the most genuine flavors of the territory. The menu follows the flow of the seasons reinterpreting the tradition with modern techniques that do not leave any space to chemistry, in favor of the respect of food and its nutritional properties without the use of semi-finished products. At the center of his sustainable philosophy, the Chef places the best products of the territory such as the Lagoon fish, the Alpago lamb, Dolomites cheeses as well as the tastiest local vegetables such as Treviso red chickory, the broccoli from Creazzo or the artichokes from Sant’Erasmo. The vegetarian and vegan menus are also excellent.

The wine cellar is a special occasion’s one: over 450 labels ranging from Ferrari’s bubbles, to Poja by Allegrini or Valpolicella by Quintarelli, to rare bottles of Petrus champagne Petrus and Ornellaia Bianco. On the ground floor there is the famous Bar Dandolo, undoubtedly one of James Bond’s favorite bars considered that the British spy hung out in Danieli at least in three of his films: Casino Royale (2006), From Russia with Love (1963) and Moonraker (1979). As a tribute to the famous secret agent the hotel’s main signature cocktail is “Vesper Martini”, named after the Bond Girl who appeared in the first Fleming’s novel, Casino Royale, strictly served “shaken, not stirred”.

Particularly during the fresh autumn days, Danieli offers an exclusive solution to enjoy an aperitif or a light dinner without renouncing to its awesome panoramic view. On the fifth floor, the same of the famous Rooftop, the Danieli Bistro offers an “ad hoc” menu and a more informal service. Under the direction of Executive Chef Alberto Fol, the wine bar proposes a delicious variety of gourmet cicchetti as well as a selection of main dishes and desserts, in perfect balance between tradition and innovation. A wide selection of Italian wines and craft beers completes this unique culinary experience. Moreover, the Bistro periodically organizes wine tastings to enhance the most sought-after wineries and the most prestigious producers.