Venissa Wine Resort is a paradise of taste and beauty located on the small island of Mazzorbo, connected to the more popular Burano island by a wooden bridge. In origin, the property was a “clos” (walled vineyard); today in fact you can still see the beautiful medieval walls and what is left of the ancient Church of San Michael the Archangel, the fascinating 14th-century bell tower. In 2010 the old manor country house was renovated following the visionary dream of entrepreneur Gianluca Bisol who intended to revive Dorona – the legendary golden grape of the Venetian doges – which he had rediscovered by chance during a visit to Torcello in 2002*. 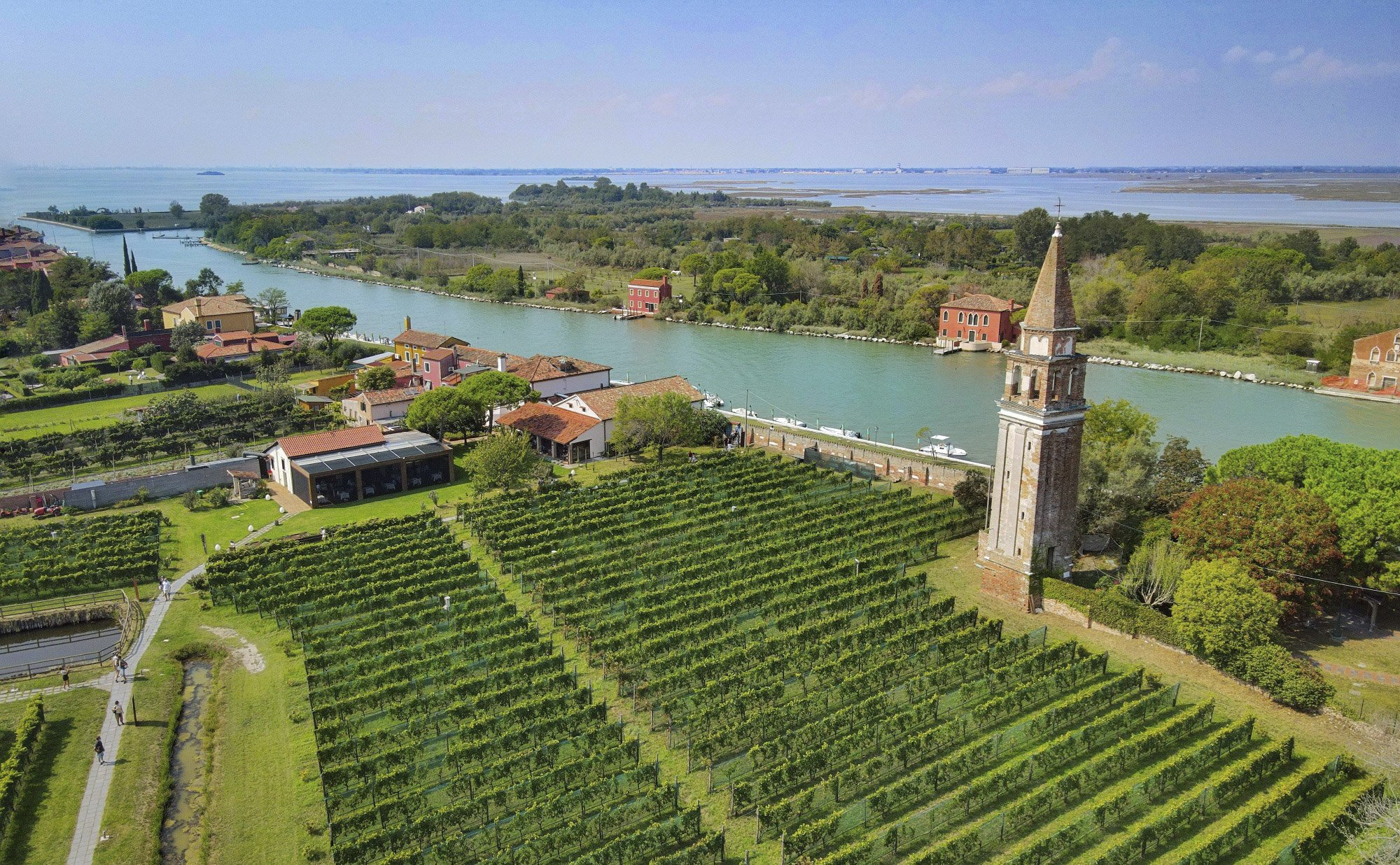 The Wine Resort, managed by Matteo Bisol, includes 2 gourmet restaurants, Venissa and Osteria Contemporanea, five rooms located in the manor house, just perfect for an enchanting gourmet stay, and the luxury studio flats Casa Burano. Located inside the traditional colored houses of the island, they are the perfect starting point to book incredible adventures such as the lagoon tour with the local “bragozzo” boat or lessons of “voga alla veneta”; the traditional Venetian art of rowing.

Opened from April to October, Michelin-starred Venissa Restaurant offers avant-garde haute cuisine and it has become in recent years an important reference in the international culinary scene. The head chefs are Francesco Brutto and Chiara Pavan, two young and courageous professionals, able to combine original signature dishes with great attention for local ingredients. Francesco and Chiara, both awarded with prestigious international titles, coordinate a team of young and talented chefs who are encouraged to experiment with their creative flair. 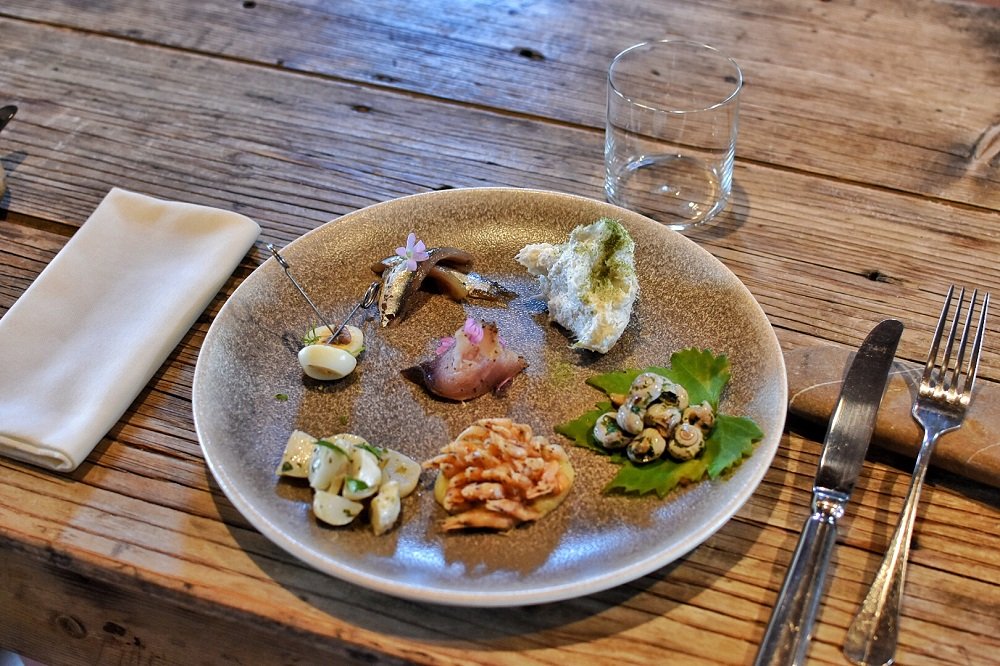 In the menu, 90% of the raw material comes from the Venetian lagoon, especially from Sant’Erasmo island and from the vegetable garden of Venissa, which includes over 22 types of spontaneous herbs. Such love for the territory also translates into respect for its ecosystem: everything in Venissa is grown without using pesticides, as its salty air, sprayed on the crops, has a natural sterilization effect.

The more informal Osteria Contemporanea, open all year round, serves traditional dishes reinterpreted by the magical touch of the chef brigade, allowing guests to experience the very best of the Lagoon fish.

The absolute protagonist of the resort is the white wine Venissa which, thanks to a terroir unique in the world, boasts aromas of sandbank honey, maritime mugwort, and white peach. Produced in just 3500 bottles, it is one of the most precious white wines in the world, characterized by a gold leaf label, in homage to the Dorona (golden) grape. From an idea of Giovanni Moretti, one of the greatest glass artists in Murano, the label is handmade by Mario Berta Battiloro in Venice.

Most recently, Venissa has launched the Isole Venusa product line that includes: Venusa Birra Ambrata, an amber beer refermented with the addition of “Santonico” grown in the gardens of the island, Venusa Rosso, a red wine produced with Merlot and Cabernet grapes from the Island of Santa Cristina, and Venusa Vino di Artemisia, a white wine made with Dorona grapes.

Venissa’s interior design is elegant and essential, combining its heritage with design touches by leading international brands such as lights by FontanaArte, chairs by Driade, textiles by Society.
The traditional colored houses of Burano have been renovated in collaboration with local artisans and design companies such as Arclinea, Bolzan Letti, FontanaArte, Glass 1989, Itlas, Moroso, Orsoni, Panto, Trend, Vimar. The ground floor has been preciously decorated with mosaics made by the Orsoni furnace, the last one active in Venice, famous for its works at the Westminster Abbey in London or the golden Buddhas in Bangkok.

To enjoy Venissa to full, we recommend taking a vintage boat from Ca ‘Noghera, book a meal in the veranda overlooking the vineyards, and then walk to the Saint Catherin Church, which dates back to 1200 and has the oldest bell tower of the entire lagoon.
Venissa can also be reached with by public transport, called “vaporetto”, from Fondamenta Nove, San Marco or Treporti.

* Viticulture played a leading role in the very early history of Venice, just think that Piazza San Marco until 1100 was a cultivated vineyard. Like the best things in life, Venissa is born “by chance”: in 2002 Gianluca Bisol saw a strange wild vineyard in Torcello. Intrigued, he started an historical and agronomic research on it, hence discovering native Dorona grape as well as the great winemaking tradition of the Venice Lagoon Islands, gone lost throughout the centuries and especially after the heavy high water disaster that the area suffered in 1966.

Rooms from 130 € with gourmet breakfast included.